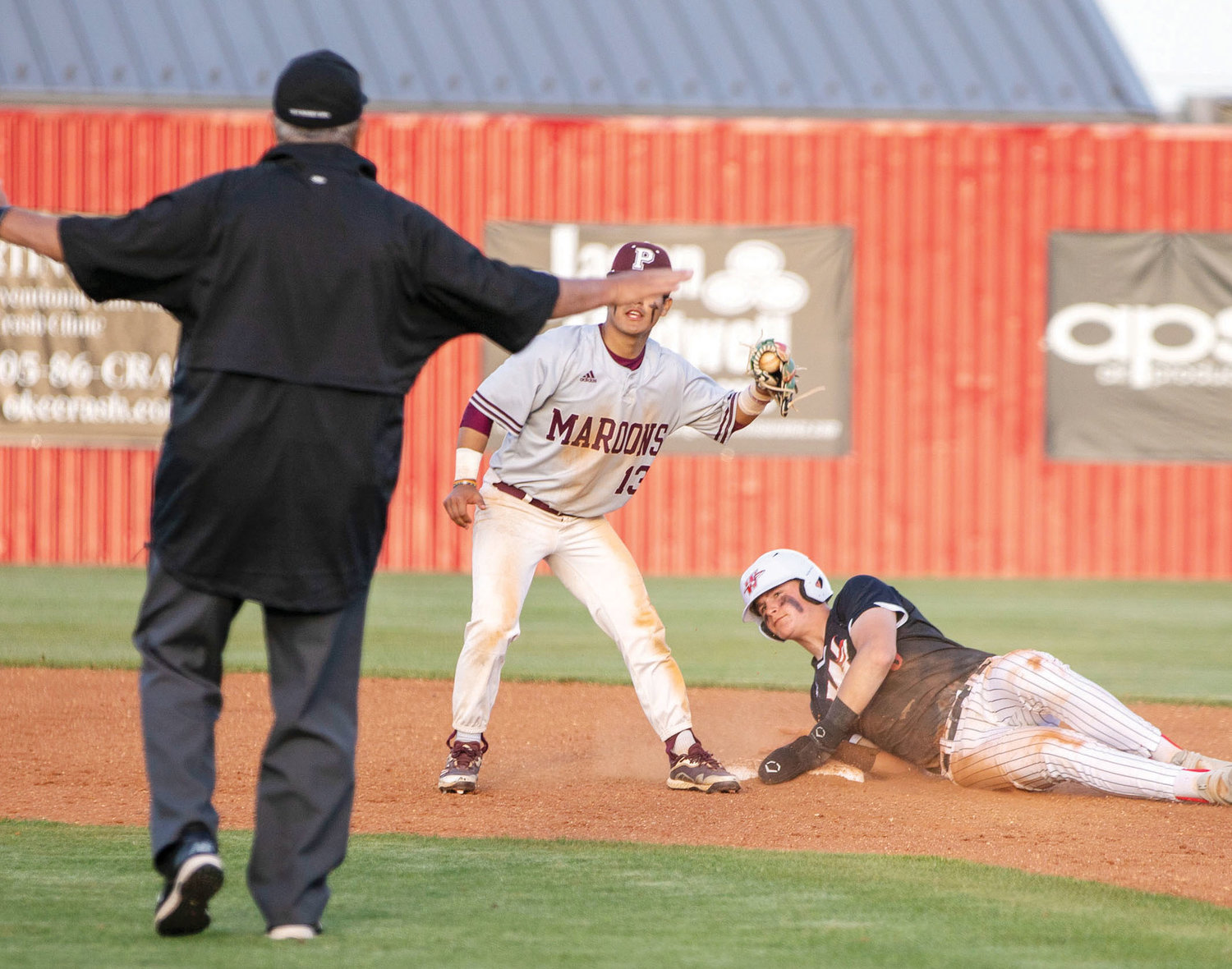 Washington freshman Nate Roberts is safe after stealing second base during Washington’s 8-3 win over Perry in the championship game of the Regional tournament.
Greg Gaston - double g images 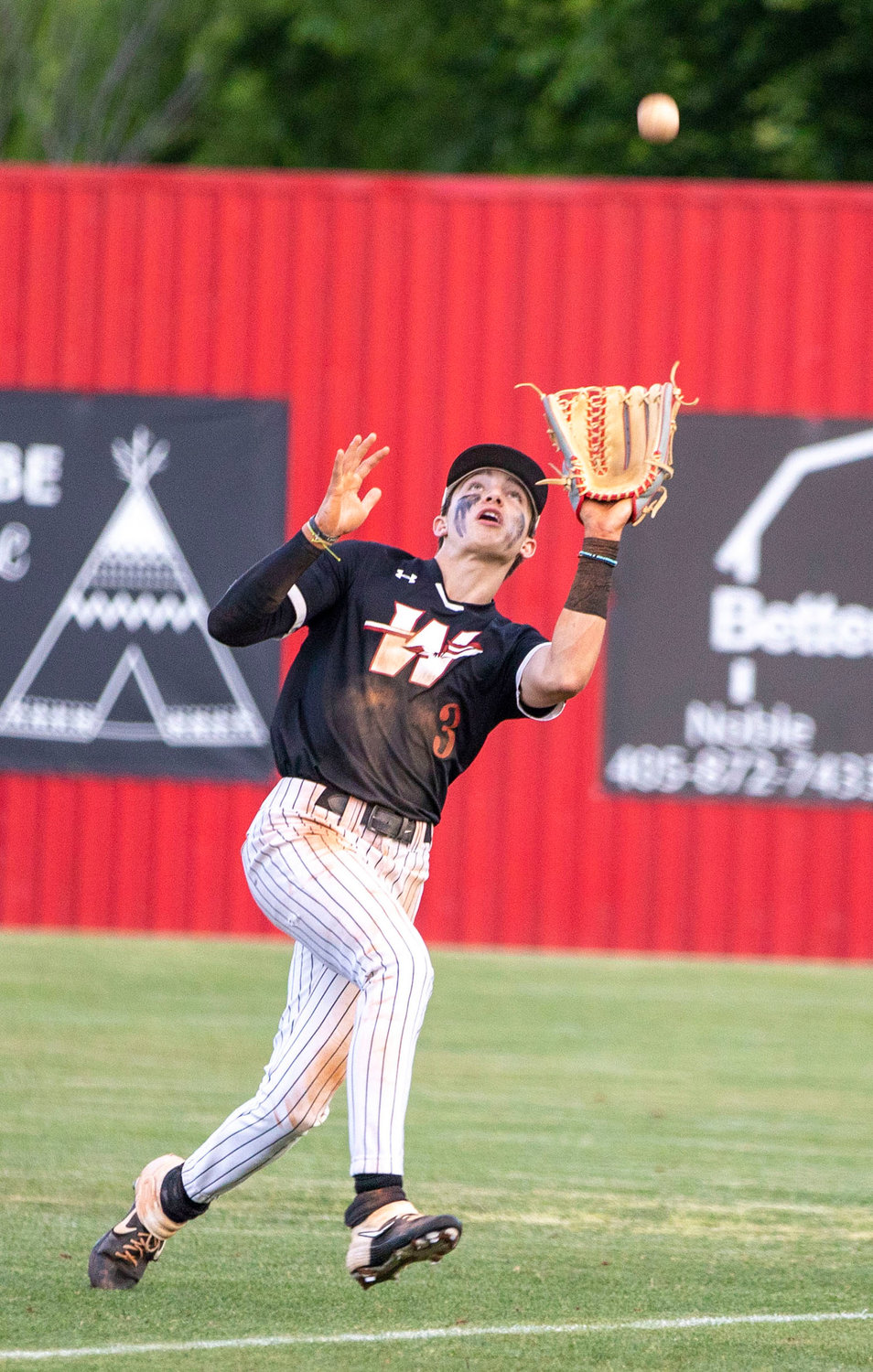 Washington junior Sutton Moore tracks down a pop fly during Washington’s 8-3 win over Perry in the championship game of the Regional tournament.
Greg Gaston - double g images
Previous Next
Posted Thursday, May 12, 2022 9:00 am
John Denny Montgomery

The Washington Warriors punched their ticket to the State baseball tournament after Regional wins against Jones, Chisholm and Perry.

They will play Victory Christian today (Thursday) at 4 p.m. at Choctaw High School.

“Victory Christian is really good,” said Warrior head coach Jeff Kulbeth. “We set some goals and one thing we talk about is to win the last one. We made it back to State and now it’s time to reach our second goal.”

The Warriors took a 13-0 win over Jones in the opening round of the Regional tournament.

The senior allowed three hits and walked one batter, while striking out two.

“Canon pitched a great game,” Kulbeth said. “We had three really good outings in the tournament by our pitching staff.”

Sutton Moore went 3-4 at the plate with a double and a triple.

“Sutton is a spark plug at the top of the lineup,” Kulbeth said. “He had two really good days of swinging the bat and it helps when we have him on base.”

Mayson Thomas and Stewart  both had a pair of hits, with one of Stewart’s leaving the yard to help out his own cause.

Cam Bates had a hit and a couple RBIs.

Washington put up one run in both the first and second innings before blowing it wide open with a six-run third.

They scored another run in the fourth before slamming the door with a four-run fifth inning.

Washington was in a much tighter ball game during their 2-1 win over Chisholm in the next game.

The Warriors scored one run in both the first and second innings.

They held Chisholm scoreless until the fifth inning when the Longhorns got on the board.

Marlon Moore was dealing on the mound.

He pitched nine strikeouts to only one walked batter in seven innings.

“He just has a bulldog mentality,” Kulbeth said. “I told him that’s what bulldogs do, they just fight you and fight you.”

Sophomore Tristin Babbitt went 2-2 and had one of the Warriors’ RBIs.

Junior Kane Springer had the other ribbie.

The Warriors claimed the championship with an 8-3 win on Friday.

Stewart had three RBIs to help lift the Warriors to the victory. Washington got out to an early 5-1 lead by the third inning.

Kade Norman and Babbitt teamed up for the pitching duties, with Babbit going 4 2/3 innings and Norman closing the final 2 1/3. The pair had six strikeouts.

“Tristin didn’t have his best stuff but he ground through it,” Kulbeth said. “Kade came in and pitched well and you give yourself a chance when you score eight runs.”

The Warriors return to the State tournament for the first time since 2019.

“Getting back is a big deal and we want to go out and play really well,” Kulbeth said. “We had a brief celebration on Friday but no dog pile after the win. We expected to be at State. That’s not to sound egotistical but that’s our mind set.”

Washington is 29-9 this season.