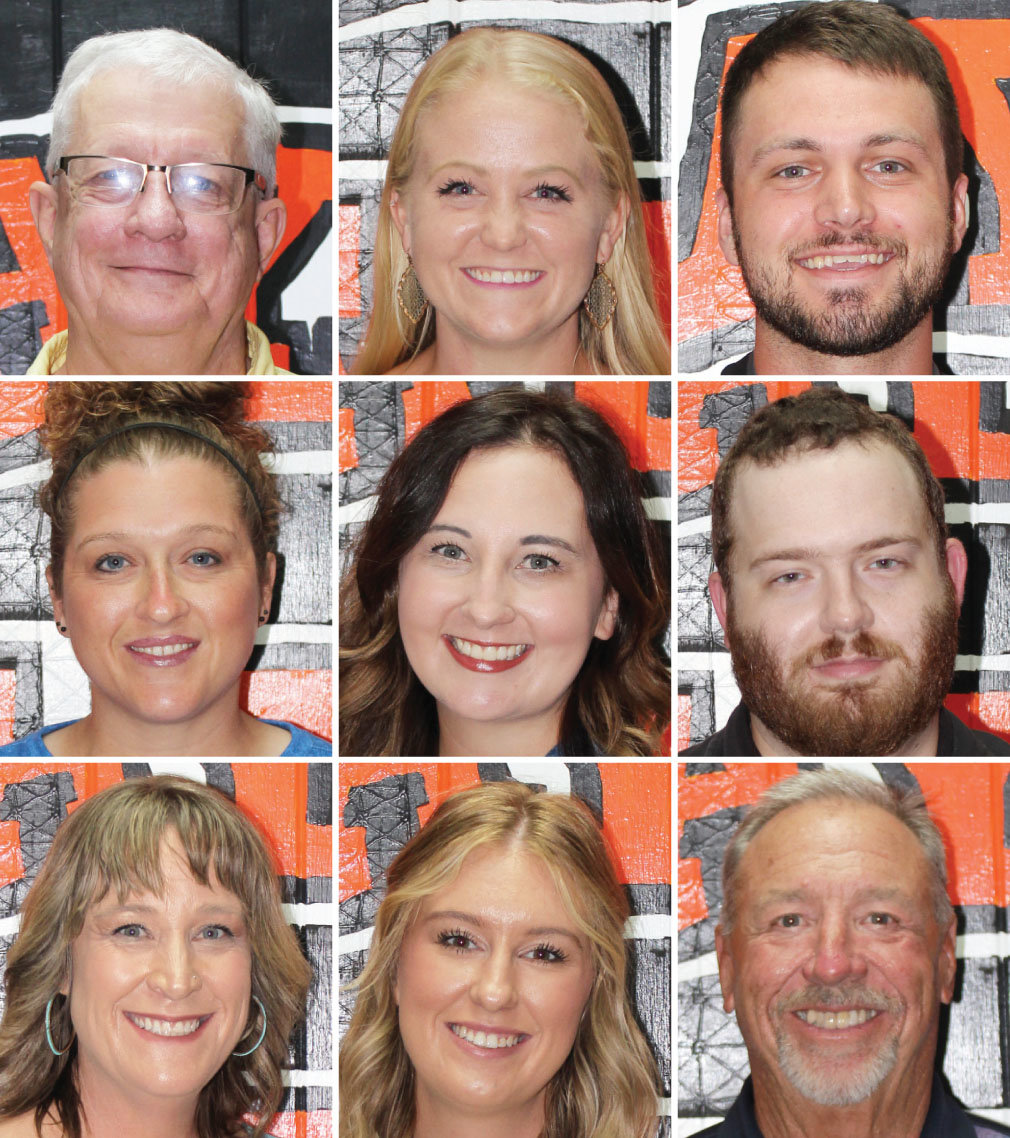 Wayne Public Schools faculty will include eight new faces this year, as well as a ninth returning to the district after 10 years.

Chris Ridgway and Rick Thomas are new at the middle school, while those at the high school are Billy Burnett, Jackson Embry and Angela Russell.

Denison is a graduate of Oklahoma State University and previously taught at Little Axe Elementary. She will teach fifth grade reading and writing.

“I want to be part of our wonderful community,” she said. My husband (Justin) and I moved to Wayne four years ago and truly love it here.”

In addition to teaching in the classroom, Denison teaches horsemanship at her “little business,” Life’s A Ride.

Lyles is teaching first grade. She is a graduate of Washington High School and University of Science and Arts of Oklahoma in Chickasha. She previously taught first grade at Purcell.

“I love the small town feel Wayne has and the community involvement,” she said. “My new co-workers are amazing and have already made me feel at home. I am so excited for this school year.”

Madden is a first year teacher and will teach second grade. She is a graduate of Wayne High School and Southwestern Oklahoma State University. She and her husband, Nicholas, have a daughter, Kinsley.

“I have lived in Wayne all my life,” she said. “I’ve always wanted to be able to teach and give back to my hometown. Really, it was a no-brainer to accept the job. Once a Bulldog, always a Bulldog!”

Shofner, another first-year teacher, will teach third grade. She is a graduate of Lexington High School and USAO. She and her husband, Cameron, have one child, Barrett.

“I chose to take this position because my husband grew up in Wayne and my child attends school here. It’s a great community,” she said.

Ridgway is teaching math and STEM at the middle school. He is a graduate of Wayne High School and the University of Oklahoma. He and his wife, Rachel, are expecting a son. A first-year teacher, he looks forward to engaging students in mathematics and fostering a new love for STEM.

“I’m excited to be a Bulldog again,” he said. “I look forward to teaching my favorite subject, math.”

Thomas will teach special education for all grades at the middle school. He is a graduate of Lexington High School and received bachelor’s and master’s degrees from East Central University in Ada and Southwestern Oklahoma State University at Weatherford, respectively. He and his wife, Missy, have two sons, Derek and Andrew.

He previously taught special education at Little Axe, Lexington, Wanette and Purcell and most recently retired from teaching for the Oklahoma Department of Corrections.

“I wanted to come back to teaching in a small community and Wayne has been a place I feel would be the right fit for me,” he said. “I have been in this area most of my life. I know a lot of people here and could not pick a better place to teach because of them.”

Burnett returns to the high school to coach girls basketball after a 10-year hiatus. He is a graduate of Elmore City High School and ECU. He and his wife, Karen, have two daughters, Brooke Burnett and Alisha Dupuis and four grandchildren.

“I am excited about coming back to Wayne after being away to help carry on the tradition of Wayne girls basketball,” he said.

Embry is teaching English I and II, in addition to coaching boys basketball. He is a graduate of Wayne High School and ECU.

“It’s a dream come true to come back home and teach, as well as becoming the head boys basketball coach,” he said. “I chose to become a teacher to have an impact on kids the same way my teachers did for me.”

He is married to Gracie Embry.

“I enjoy a small school environment and my degree is in science and that’s what I love to teach the most,” she said.

She has two children, Makenna and Kheen.