Defensive performance for the ages 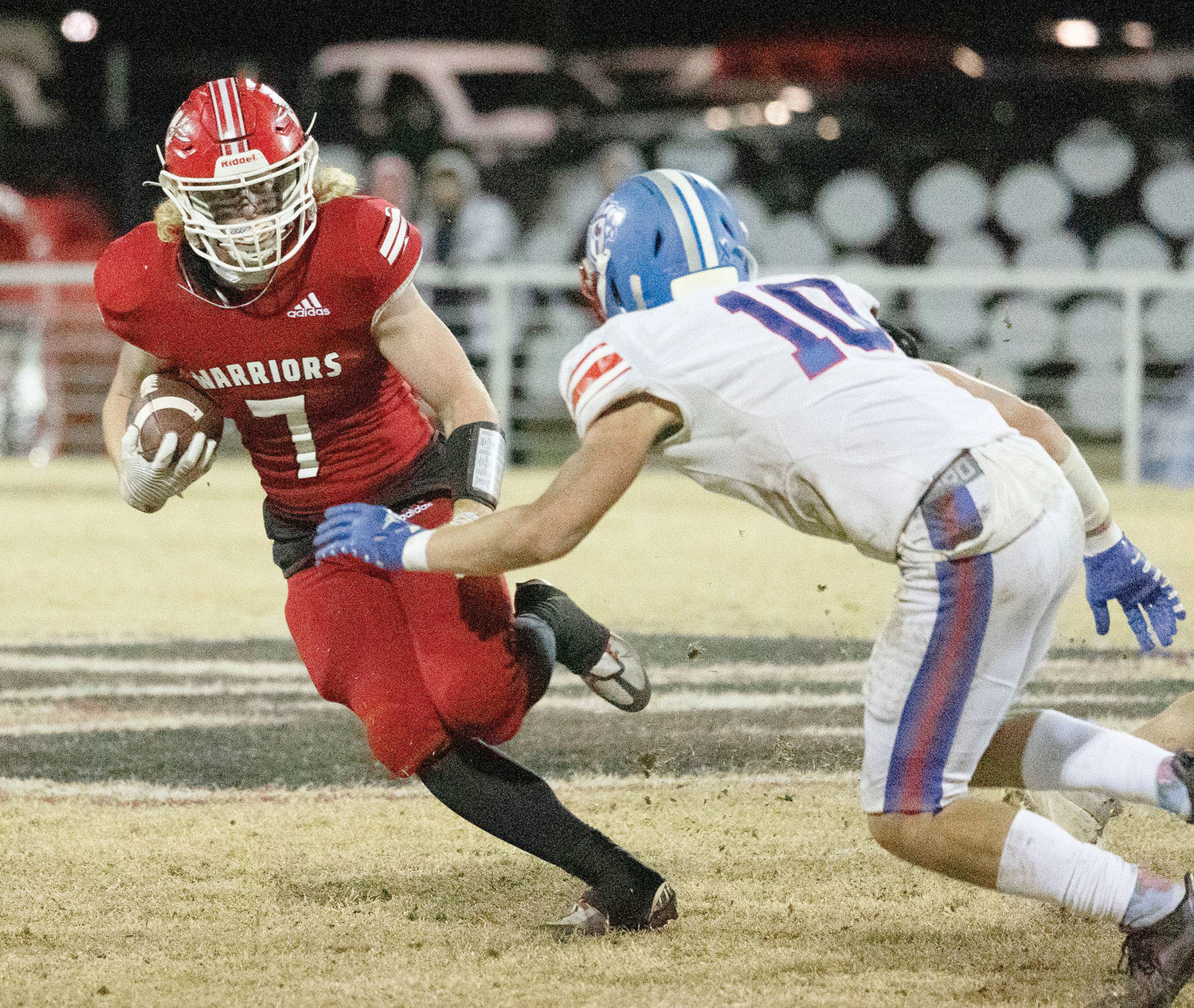 Washington senior Cole Scott tries to get outside of a Oklahoma Christian School defender last Friday on a run play. Washington defeated the Saints 18-11 and Scott scored two touchdowns in the win. The Warriors travel to McAlester for a game against Idabel in the quarterfinals of the State playoffs.
Greg Gaston - double g images 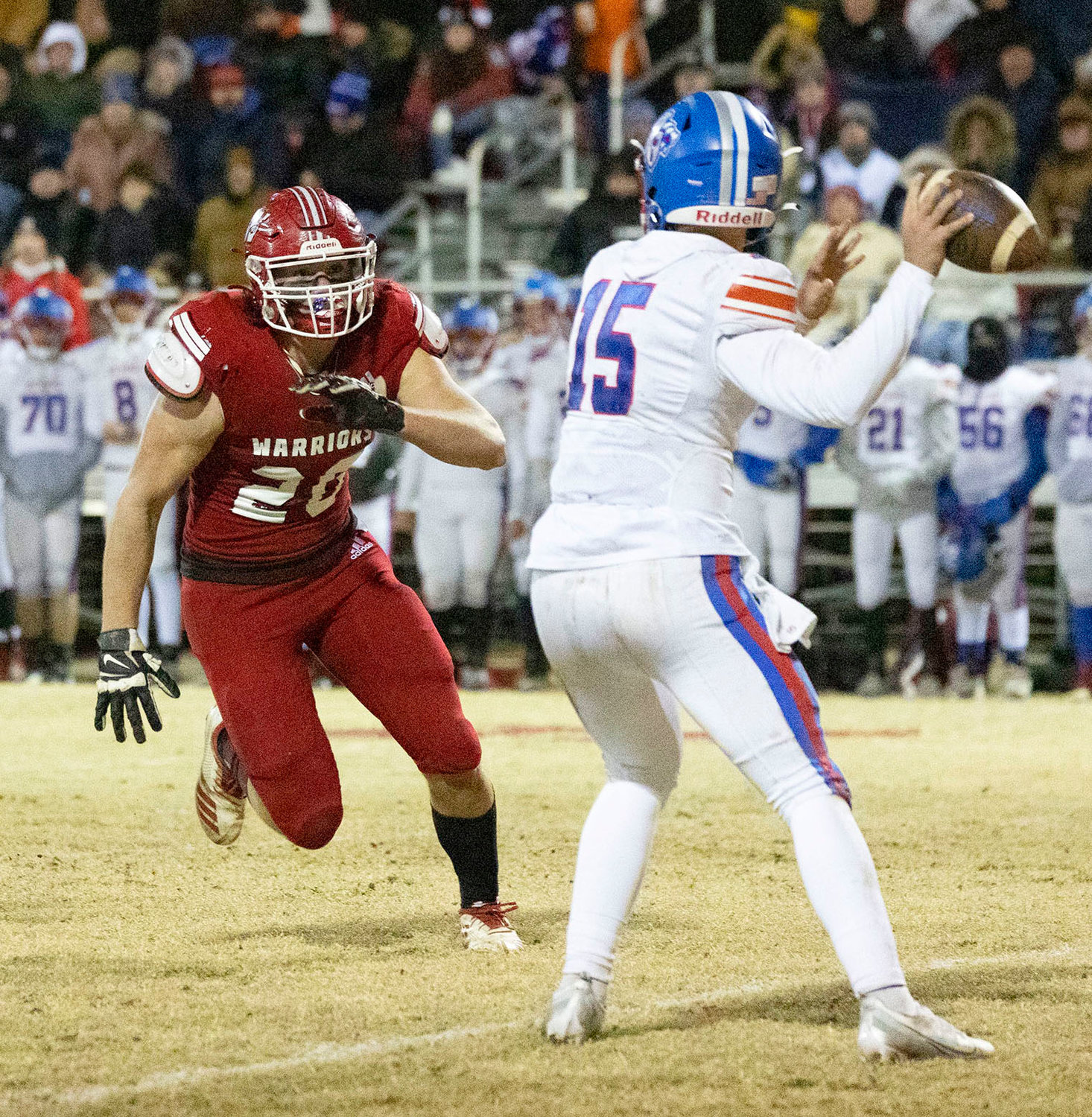 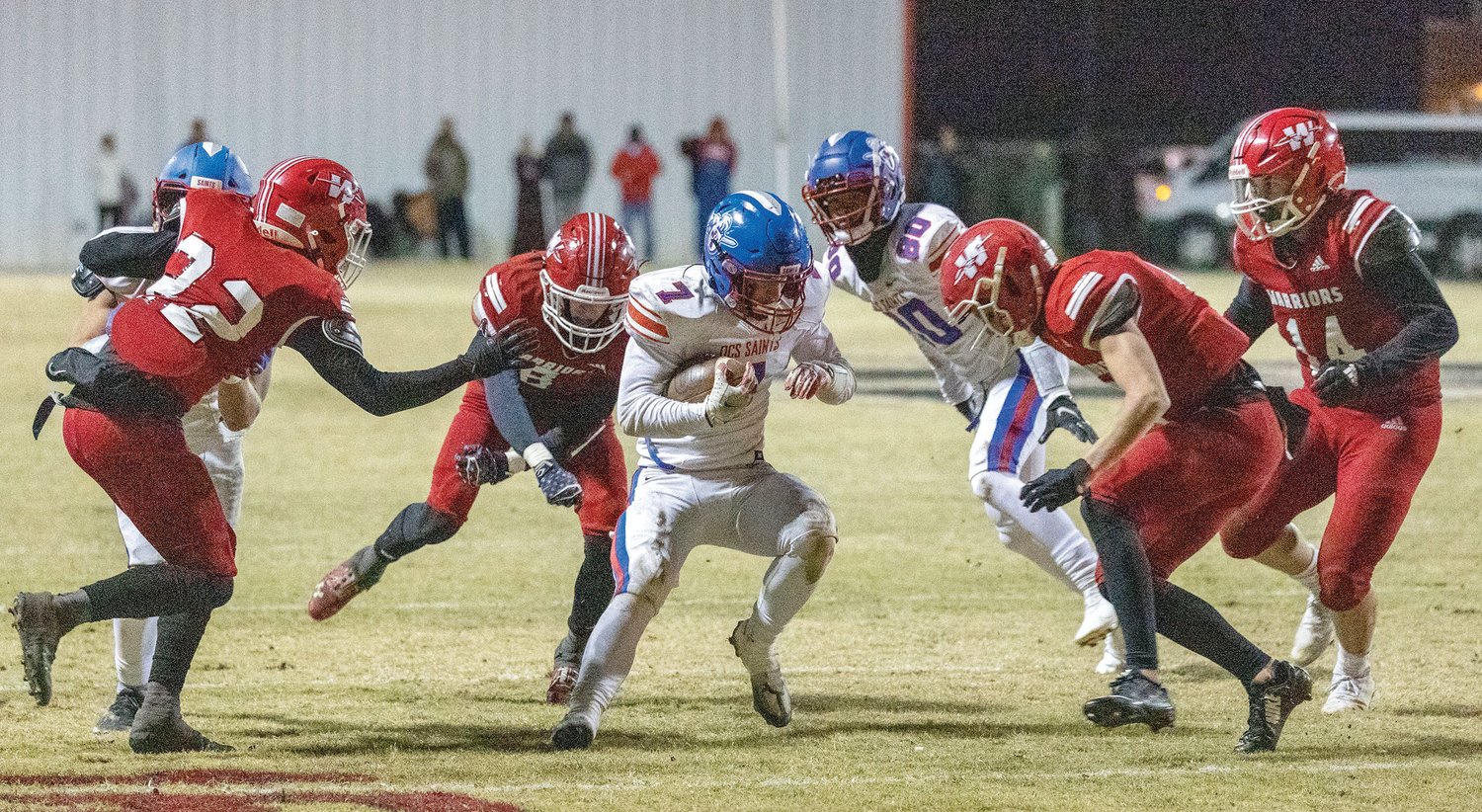 The Washington defense held Oklahoma Christian School to 11 points last Friday, despite giving up field position to the Saints on multiple occasions. Among the Warriors on this play are Ben Vaughn (8) Keller Howard (14) and Marlon Moore (22). Washington travels to McAlester this Friday for a quarterfinal showdown against Idabel at 7 p.m.
Greg Gaston - double g images
Previous Next
Posted Wednesday, November 23, 2022 9:00 am
John D. Montgomery

Washington coughed up four fumbles and threw an interception last Friday night but thanks to a defensive performance for the ages they eased by the Oklahoma Christian School Saints, 18-11, to advance to the State Class 2A Quarterfinals.

The No. 1 ranked and 12-0 Warriors will square off against the Idabel Warriors at 7 p.m. Friday night at McAlester.

This is the first year the quarterfinals are being played on a neutral field.

“The OSSAA did it to limit the amount of travel, especially on a holiday weekend,” head coach Brad Beller said.

Idabel is 9-3 and has a talented sophomore running back that already has division one offers. They operate out of a spread formation.

“They spread you out to run the football,” Beller said. “They have several really fast skill position players and are big and strong up front. They are really disciplined, too.”

Beller reports Idabel is about as multiple as you can get.

“They line up in a 4-2, a 4-3, a 3-4 or a 4-4 depending on the situation. They will line up in whatever they think will give them the best opportunity for success,” the coach said.

One of the Washington fumbles was on their own four yard line.

The defense held the Saints to a field goal.

Two other times the Warriors turned the ball over inside their own 20 and both times held OCS out of the end zone.

“Our defense kept us in the game,” he confirmed. “It wasn’t that our offense didn’t move the ball. It was just the turnovers.”

At one point in the second quarter the Warriors turned it over three times in a matter of six minutes.

“Our defense did a great job of holding them when they had great field position. I’m very proud of how they played, especially in such bad situations,” Beller said. “Usually that many turnovers this time of year spells defeat. We were fortunate to be able to come out clean.”

Beller said his offense played well in the second half.

“It was just little things here and there that kept us from blowing them out,” he said. “We had over 400 yards of offense and only 18 points. That’s just not us.”

Cole Scott rushed the rock 22 times for 189 yards and two touchdowns. On the game’s first play Mason Singletary took the ball to the house on a 67 yard cross-country gallop.

“Major Cantrell also had a good night rushing the football,” Beller said. “It was just the turnovers. But an ugly win is better than an ugly loss. We just survived and advanced. I feel like we’re a better team for it.

“I can’t say enough about our defense,” he continued. “It was one of the more dominating defensive performances I’ve seen here at Washington.”

The key to reaching the semifinals, Beller says, “First and foremost protecting the football and controlling the front line on offense. And on defense we’ve got to limit the big plays. That’s where they get their energy.”

Bulldogs get 2nd in Grady Co.