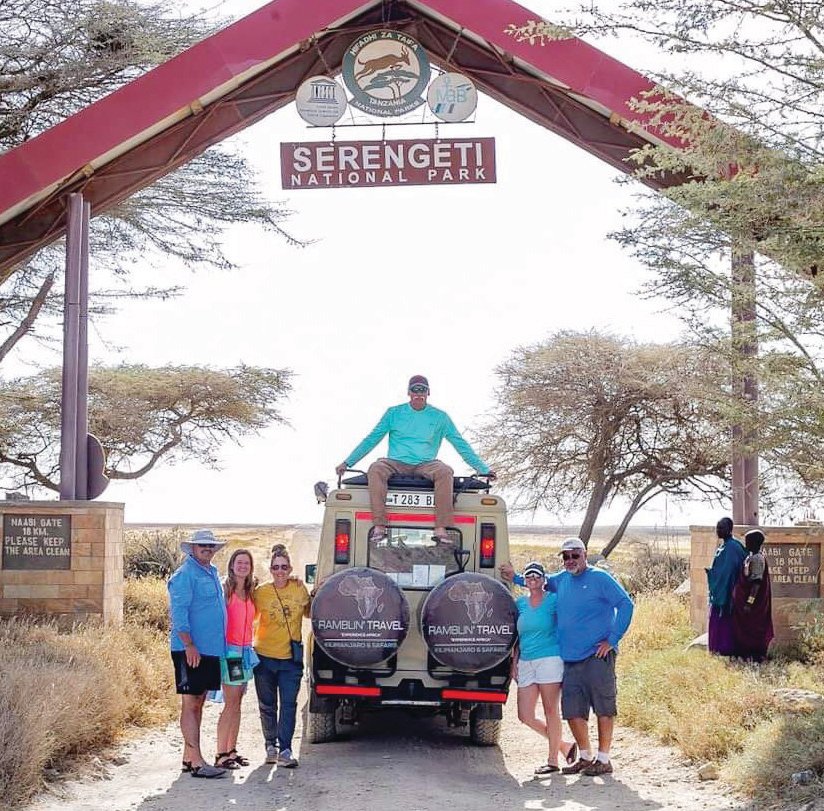 The Coxes, the Fulks and the Carrs set to go on a safari in the Serengeti for an adventure of a lifetime.
Posted Thursday, July 28, 2022 9:00 am

For Ted and Lori Cox their unique vacation to Tanzania provided some unexpected findings.

Lori learned that she absolutely loves to climb up rock walls and Ted lost 18 pounds during their June 19-July 9 trip to Africa.

They along with two other couples, Fulks and Carrs, went to climb Mount Kilimanjaro, go on a safari and fish.

“Mine actually counted as making the summit,” Ted said.

Lori got altitude sickness and experienced vertigo and had to be assisted down to a lower camp. It took her awhile to recover.

Kilimanjaro is 1/2 mile higher than the highest peak in the lower 48 states, Ted said.

On summit day some of the hikers left at 11 p.m. and others that are a little faster left for the top at midnight.

Ted reported it took him 10 hours to reach the summit and four hours to descend.

“Going down is just as hard on your body,” Ted said. “I may have lost 18 pounds but it wasn’t for lack of food. There was plenty of it and it was good. It was just hiking so many hours for eight days.”

The Coxes reported there are three routes up to the mountain. They took the longer one.

“The longer route helps you acclimate,” Lori said. “The longer you go, the better chance for success. At 17,000 feet it just hit me. No one else got altitude sickness.”

On their way to the mountain they had to scale the Baranco Wall, all 843 feet of it.

“I didn’t know I like doing that,” Lori said with a big grin. “There was a narrow gap to go through called the Kissing Wall because you are so close to the rock you can kiss it.”

Lori called the climb up the giant wall “Cool. I loved it.”

The excursion with their co-hikers, porters, guides and cooks totaled 32 people in their group.

“The porters were amazing to watch,” Ted said. “They carry all your stuff like tents, chairs, cooking supplies basically everything you need to live on the mountain for seven days.”

Plus, they have their own backpacks. They would carry about 40 pounds of gear on their heads, the couple reported.

After the hikers would leave a base camp (there are seven on the route) the porters would stay and pack up all the tents and gear.

“They would race past us while we were hiking to set up the next camp,” Ted said. “It was great getting to know them and things about their families and about their lives.”

“The porters would wake us up about 6 a.m. serving hot tea or coffee,” Ted said. “About 6:30 they would bring a bowl of warm water for ‘washy-washy’. That was it on the mountain because there are no showers.”

By 7-7:30 the hikers would be treated to a hot breakfast and then take off walking on the next expedition around 8 a.m.

The hikers would gather up their things like sleeping bags and air mattresses and the like so the porters could carry them to the next camp.

“The senior porters and staff could speak enough English to carry on a conversation. Some of them spoke about as much English as I did Swahili,” he said with a laugh.

There were multiple groups like theirs on the mountain at the same time they were.

Before starting their hike in the rainforest, they stayed a night in a hotel in Arusha, a city of about 900,000.

The trip to Africa was a story in itself.

The group flew from Oklahoma City to Dallas and then from Dallas 15 hours to Doha, Qatar.

Doha is directly across the Arabian Sea from Iran, Cox said. From Doha they flew to the Kilimanjaro airport, a flight of about five hours.

Kilimangaro is eight hours ahead of Central Time, they said.

Lori said they watched a lot of movies during all the flights.

After the mountain climb, the group went on a three day safari in the Serengeti, sleeping in tents just outside one of the country’s national parks.

“The coolest thing about the safari is something I really didn’t realize,” Lori said. “It was just how close you got to the animals.

“The animals would just walk right in front of our Land Cruzer. We saw leopards, giraffes, wildebeests, warthogs, hippos, crocodiles and ostriches,” she said. “One thing we didn’t see was a rhino because the Black Rhinoceroses are almost extinct.”

Lori said at one point they looked over and there were four lionesses just a few feet away from the vehicle.

The group spotted a huge Blue Spitting Cobra slithering across the trail right in front of them.

They all started taking videos and photos until it turned around and fanned out its hood.

“We all scrambled back to safety,” Lori said.

Once again they couple bragged on the food. Just like on the mountain, the food on the safari was top shelf.

Ted said they would have eggs, bacon, sausage, French Toast and a selection of over 40 different bananas.

For lunch and dinner, meat and soups were the main fare.

“Every day there was something cool and new,” Lori said of the trip through the Serengeti.

“A laborer makes from $5 to $7 a day and a gallon of gasoline costs five dollars, basically a day’s wages,” Cox said.

Lori said you either work on a farm or on the mountain.

“Those are about the only two jobs there are,” she said. “On our trip we really got a taste of what it’s like in Tanzania. We saw real people. We didn’t want to just be a tourist.”

They both agreed the mountain climb was one of the hardest things they’ve ever done.

“We were the first group for the company that were basically flat landers with no elevation,” Lori said. “Had I known what it was going to be like going up and down and up and down I would have trained differently.”

Ted said the day he summitted he hiked for 18 hours while the others hiked 13-14 hours.

“They want you to summit early (right around sunrise) and then descend because otherwise it gets too hot,” Ted said.

Back to School Bash

More local news
The money crunch
The most contentious agenda item at Monday’s Purcell City Council and Public Works Authority meeting wasn’t even up for a vote. During the council meeting, council member Allen Eubanks …

Back to School Bash
Free school supplies are nothing to be scoffed at. The 13th annual Heart of Oklahoma Back to School Bash is Saturday in downtown Purcell. The event starts at 5 p.m. at 2nd Avenue and Main …
Staying safe in unsafe times
School shootings are a frightening – and rising – trend in this country. Don’t think so? Think again. Between January 4 and May 24, students were targeted in 28 school …
An Interesting Neighbor
John Blue tells people when he headed east out of the Texas Panhandle, Purcell was the first place he came to with grass and trees so he stopped and settled here. That’s not how it happened …
Advent in August
Global warming likely put the kibosh on the Christmas in July campaign for McClain County Operation Christmas. Well, a new month brings new opportunity to give. So how about Advent in …