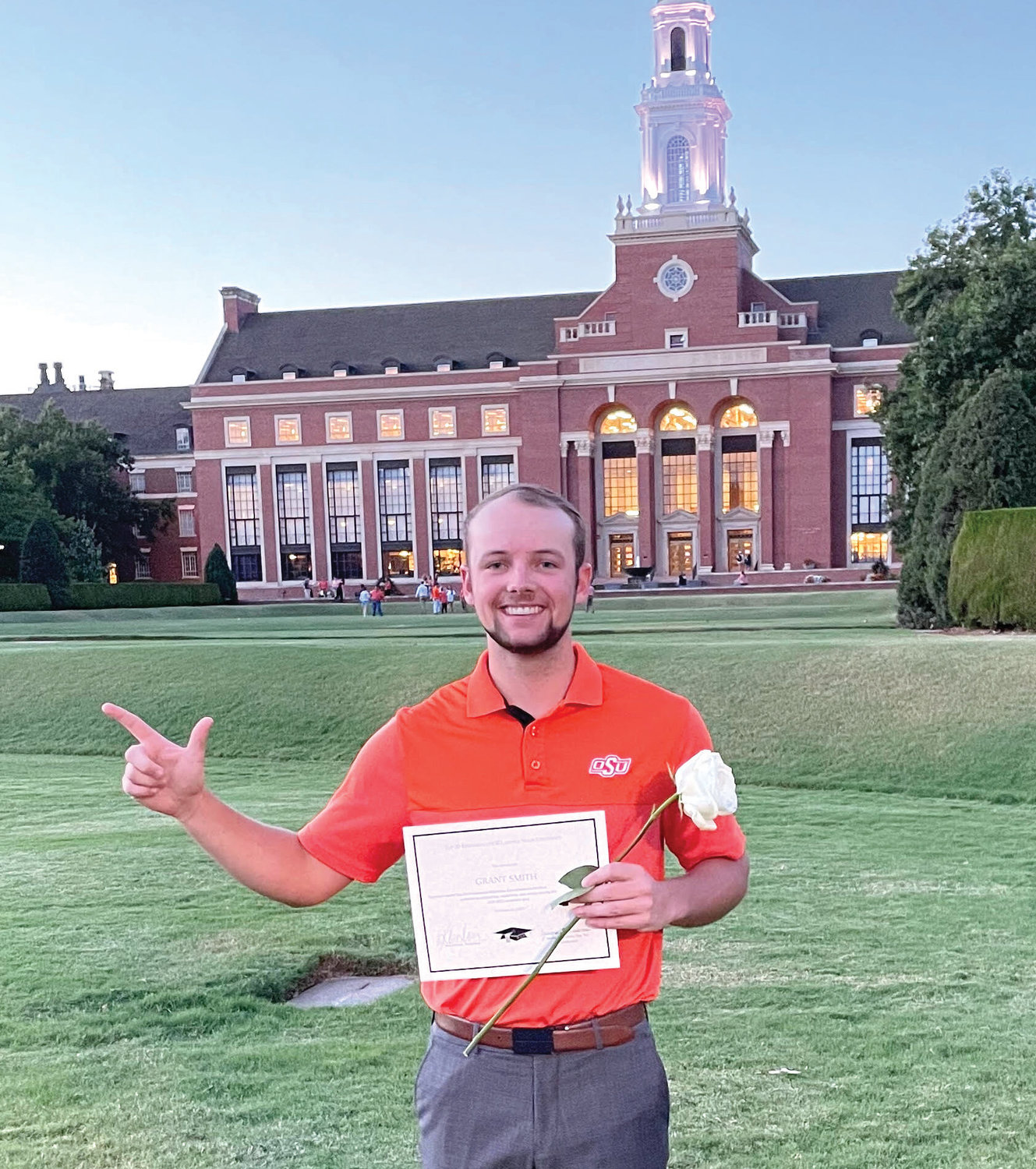 Purcell’s Grant Smith holds the white rose and certificate he received for being named to the Top 20 Freshmen men at Oklahoma State University. Now a sophomore, he is majoring in construction engineering technology.
Posted Thursday, October 21, 2021 9:00 am
Jeannie Grimes

In the fall of 2020 at the height of the pandemic, Oklahoma State University reported a 1.5 percent bump in enrollment.

There were 4,144 freshmen who enrolled that fall.

Let that number sink in – four thousand one hundred forty-four.

Purcell’s own Grant Smith, now a sophomore, is in that rarefied company.

The 2020 Purcell High School graduate began the extensive application process earlier this fall at the start of his sophomore year.

He had just pulled a 4.0 in his spring semester classes. Coupled with a 3.75 his first semester, Grant felt his GPA was “pretty hot.”

He is a member of Alpha Gamma Rho fraternity on campus, where he serves as homecoming director and academic mentor for his brothers. He is also active in other clubs and organizations like the Construction Management Society.

And he had compiled a good record of community involvement activities with Stillwater sports by coaching coach-pitch baseball.

The application also included a section on what the student has done for OSU.

An essay tied it all together.

Grant is majoring in construction engineering technology and plans to focus on commercial construction after graduation.

“I should graduate at the top of my class for my major,” he said.

He is on track to graduate in 2024 and is undecided if he will pursue a graduate degree.

Though the Top 20 recognition doesn’t come with a financial reward, it is an impressive addition to one’s resume when entering the job market.

Grant said he weighed his options at both OSU and the University of Oklahoma before deciding where he would attend college.

“The Construction Engineering Department here is really good,” he said, “and OU was just too close to home.

“I wanted to get out a little bit.”

Grant learned of his selection “two or three weeks ago.”

The Top 20 is sponsored by OSU Mortar Board and Grant said Mortar Board officials “come to your class and present you with a rose.”

When two of his friends received their roses, Grant’s hopes dimmed.

“I actually thought I didn’t get it,” he said.

But he was tipped off to expect being called out before the committee showed up later that day at his physics class.

So it didn’t come as a complete surprise.

In fact, Grant was among five in his fraternity to make the Top 20 list.

Grant is the son of Jennifer and Bill Smith and grandson of Bill and Bettye Smith.

A younger sister, Grace Smith, is now a senior at Purcell High School and is in the process of applying to colleges.

He doesn’t know if she will follow his lead to OSU.

More local news
60 attend ODOT hearing
Relief for backed up traffic at the Interstate 35/State Highway 9 West interchange, better overall traffic flow and safety in the area are being prioritized by the Oklahoma Department of …
How to prepare the turkey
Kindergartner Beau Cunnius Mrs. Uhlenhake’s Class Favorite thing about Thanksgiving is the turkey. You cook it by, “Putting it on a tray and set it in the oven. Turn it on for 10 or …
5 questions with Rocky Clarke
Editor’s note: Answering  The Purcell Register’s five questions this week is Rocky Clarke, Washington Elementary School principal. Q: As principal over pre-K through 5th grade, …
1 arrested in trafficking case
Just after 8 a.m. last Thursday agents with the Oklahoma Bureau of Narcotics (OBN) swooped in to make an arrest at the former Perfection Hy-Test facility on South Green Ave. and Juneau St. The …
Chamber hears Osborn
Heart of Oklahoma Chamber of Commerce members know a little more about the office of Oklahoma Labor Commissioner after last Friday’s luncheon at Mid-America Technology Center. Leslie Osborn …