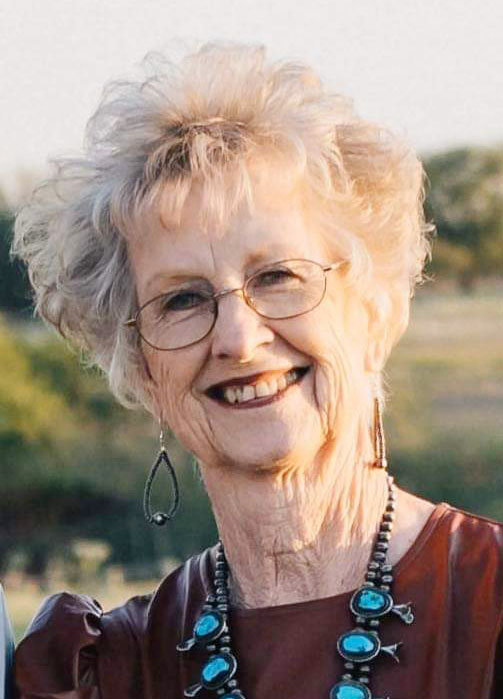 Jessie grew up and spent her childhood days in Kerrville and Hunt, Texas. In her younger years, she was an extremely good athlete. Jessie was very shy and enjoyed fishing on the Guadalupe River and tending the family garden.

On October 28, 1961, Jessie married Johnny Taylor in Juarez, Mexico, in a private ceremony and then later had a ceremony with their family and friends in Alpine, Texas.

Jessie attended cosmetology school in Abilene, Texas, and did hair for 30 years. When she wasn’t in a beauty salon, she went to nursing homes providing hair care and was a nurse’s assistant. Caring for the sick and elderly was her life’s calling and she took great pride in the care she provided. She retired from SORC in Pauls Valley, Oklahoma.

She was a woman of great faith, anyone who knew her knew that. She worked at the church in Elmore City, Oklahoma, almost seven days a week, and she served many funeral dinners and volunteered in many other ways. She loved serving others. Jessie was a member of the Elmore City First Baptist Church and her and Johnny loved taking part in the Country and Western Dancing at the senior citizen center. Being a rancher’s wife, Jessie helped work cattle, killed rattlesnakes, and cooked many meals for the cowboys up until last summer. Jessie loved to cook, and she always looked forward to family reunions with her siblings, they just gathered for their 40th annual! What she couldn’t get enough of was time spent with her grandchildren and great-grandchildren. She will be remembered as a strong Christian who taught others about Jesus Christ.  She will be missed by so many.

Mrs. Taylor was preceded in death by her parents, Newton and Pearl Sparks; brother, Newton Sparks, Jr., and her sister, Velma Gary of Van Horn, Texas.

Funeral services were held Saturday, November 19, 2022, at the First Baptist Church in Elmore City, Oklahoma.  Interment was in the Antioch Cemetery under the direction of Wooster Funeral Home. You may send a condolence to the family at www.woosterfuneralhomes.com.