Funeral services for Dot Klepper, 83, of Oklahoma City were held Tuesday, July 20, 2021 at Southern Hills Baptist Church in Oklahoma City. Interment was at Hillside Cemetery in Purcell under the direction of the Wilson-Little Funeral Home in Purcell.

Dortha Helen Kemper was born August 22, 1937 in Wanette, Okla., the baby of five children and only daughter born to Charlie Logan Kemper and Sadie Flossie (Oliver) Kemper. Dot was raised in Purcell and attended school there, graduating with the Dragon Class of 1955.

She married young, and to this union, a daughter, Terri was born. By 1974, Dot had settled in Oklahoma City. She started working in sales for OG&E, and retired after more than 20 years of dedicated service.

Family meant everything to Dot. She worked hard to raise Terri, and was never happier than the day she became a grandma to Robert and Brian. She was a woman of great faith, and stayed active in various ministries within her church, Southern Hills Baptist Church in Oklahoma City. Dot was a wonderful mother and grandmother, sister, aunt and friend. She will be dearly missed!

She was preceded in death by her daughter, Terri Newville; grandson, Robert Newville; great-grandchildren, Brooklynn and Jace Newville; her parents, Charlie and Sadie Kemper and her brothers, Chuck Kemper, Charles Kemper, Bill Kemper and Floyd Kemper.

More local news
Missing man: lives on hold
Missing persons and mysteries have one thing in common. The family and detectives left behind with questions, but no answers. Such is the case of Bill Dwayne Shipley, last seen July 19, …

Rodeo returns!
When rodeo returns to Purcell on Friday and Saturday, there will be a new stock contractor, level of competition and tradition not seen locally for many years. The Indian Territory Round-Up Club …
Gearing up for fall
High school football practice begins in Oklahoma August 9. Coaches have the option of practicing more than once a day, or going for an extended period until class work begins. Classes begin in …
Rainfall nearing 30 inches
The thunderstorm that rumbled through the Heart of Oklahoma Sunday evening dumped 1.8” of rain in Purcell hiking the total for the year-to-date here to 28.40”. That compares to …
Broomcorn’s last thresh
Editor’s note: This is the second installment of a series on broomcorn) Broomcorn Johnny Essentials Wherever they went, there were two belongings Broomcorn Johnnys could be counted on to … 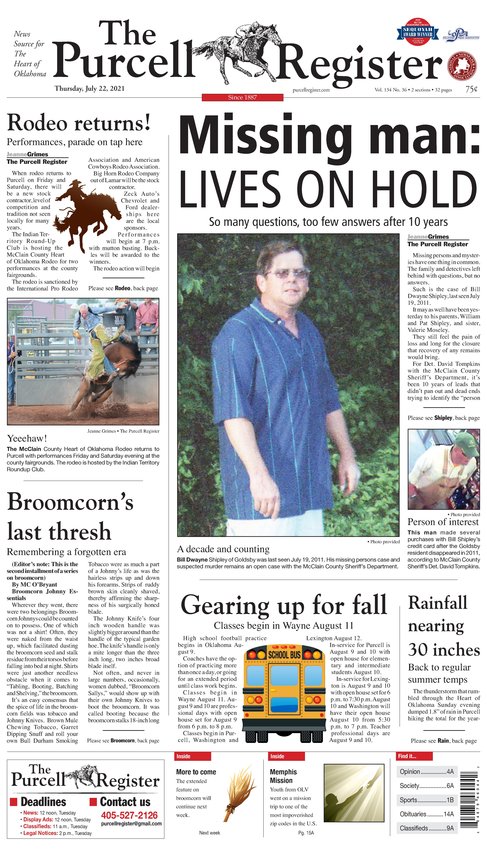