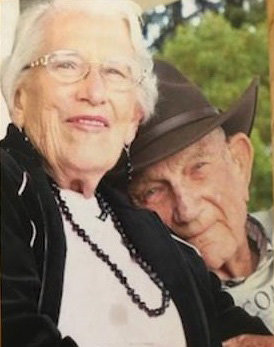 Reverend Braxton Luther Combs passed from this life on August 19, 2019. His beloved wife, Margaret Ann (Love) Combs passed a few months later, on December 1, 2019.  Memorial services were previously held at Holy Cross United Methodist Church in Stockton, California. They will be laid to rest at 2 p.m. Saturday, May 21, 2022 at the Washington Cemetery, entrusted to the care of Wadley’s Funeral Service. Online condolences may be made at www.wadleysfuneralservice.com.

Braxton was born July 4, 1923 to an Oklahoma Methodist preacher, James Manuel and Floy Odessa Combs. He served five years as a US naval officer during World War II, and retired as a Lieutenant JG. He obtained an MS/BS degree in Physics, Math and Education at Oklahoma State University.

Margaret Ann Love Combs was born December 31, 1926 in Washington, Oklahoma, to William Frank and Grace Elizabeth (Townsend) Love, a farmer and a schoolteacher, respectively. Marge attended the Oklahoma College for Women in Chickasha, and then transferred to Oklahoma State University in Stillwater.

Braxton met Marge in an art class, and they were married in the First Baptist Church in Washington, Oklahoma, on June 15, 1947. Marge completed her BA and MA in Home Economics from OSU and taught high school and college, while starting their family.

Later, Marge obtained her real estate and insurance sales licenses and, as in her church life, she focused her business efforts on service, assisting first-time home buyers and helping teachers plan for retirement. Marge was a lifelong member to the Order of The Eastern Star and of PEO.

Braxton followed a Divine call to the ministry that led them to California via seminary at Perkins/SMU in Dallas, Texas. Braxton joined the California-Nevada Conference of the United Methodist Church in 1956. Together, they formed an exemplary team in ministry, serving 11 churches in the San Francisco Bay area and Central Valley of California throughout their 32 years of service.

They also served in international ministry with the Ecumenical Institute in Paris, France. While there, Marge worked as the cook in the American Church of Paris, providing 92 meals to more than 4,000 people overall during her year of service (1973). They served multiple missions in Wales, Mexico and in the US. After Braxton’s retirement, they also served in two London parishes (1990).

Braxton and Marge touched the lives of thousands through their compassionate ministry, both in the US and abroad. Together, they shared a life of deep faith and true service with a heartfelt mission to share the love of God.

May they rest in peace, back home at last in Oklahoma and within God’s Loving Embrace.