Both Purcell boys and girls go to Enid 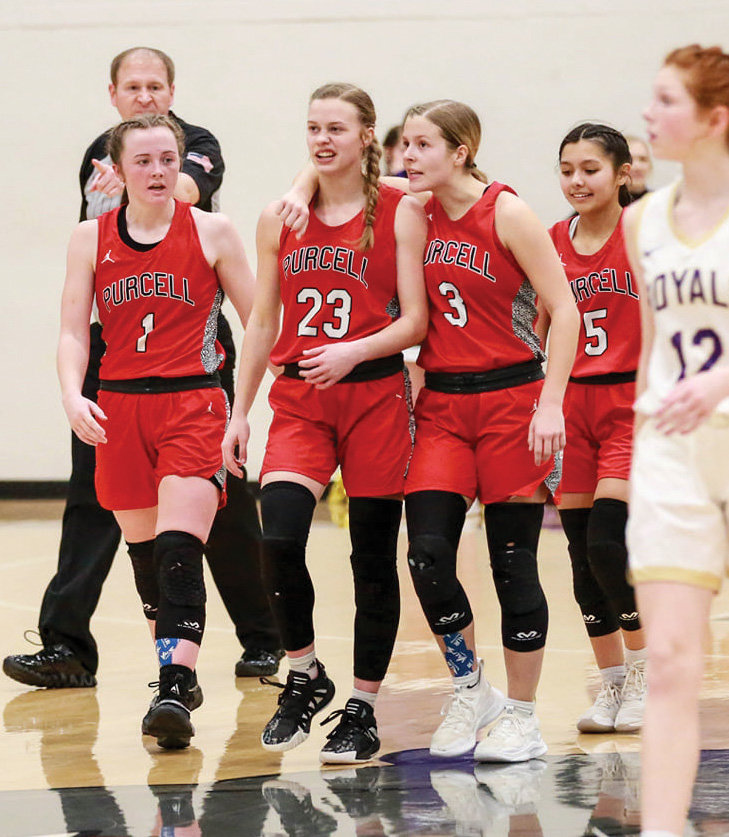 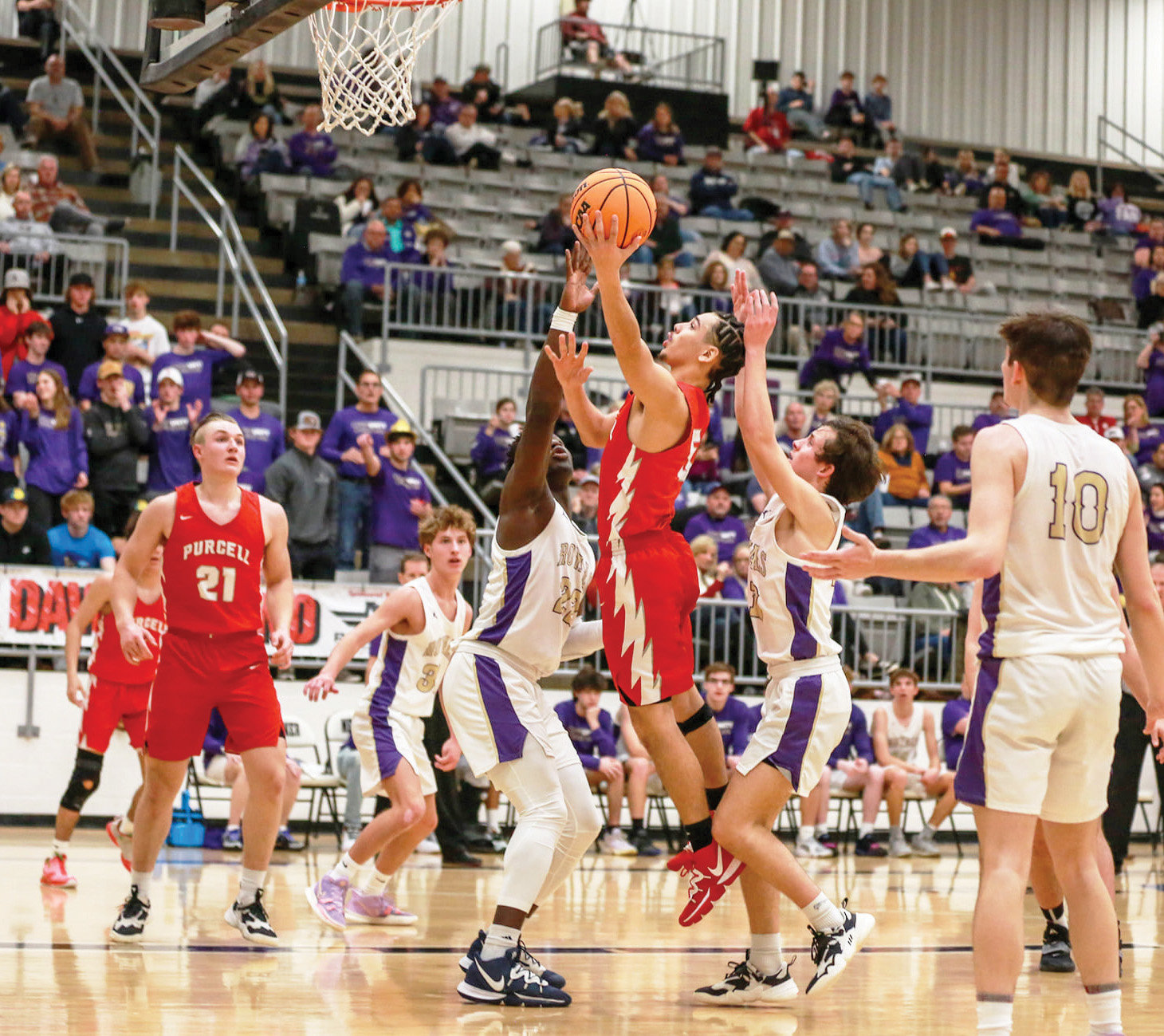 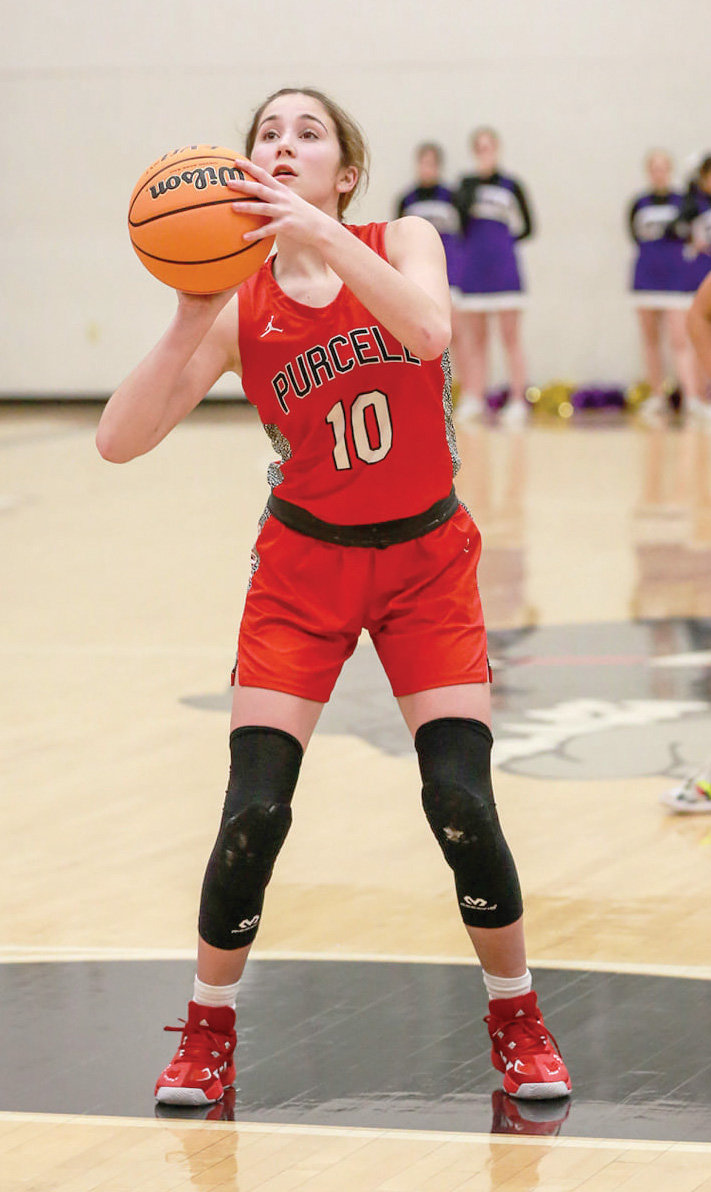 Purcell freshman Haven Buchanan shoots a ball from the charity stripe during the Dragons’ 68-65 overtime win against CCS in the Regional tournament.
Stephanie Knowles 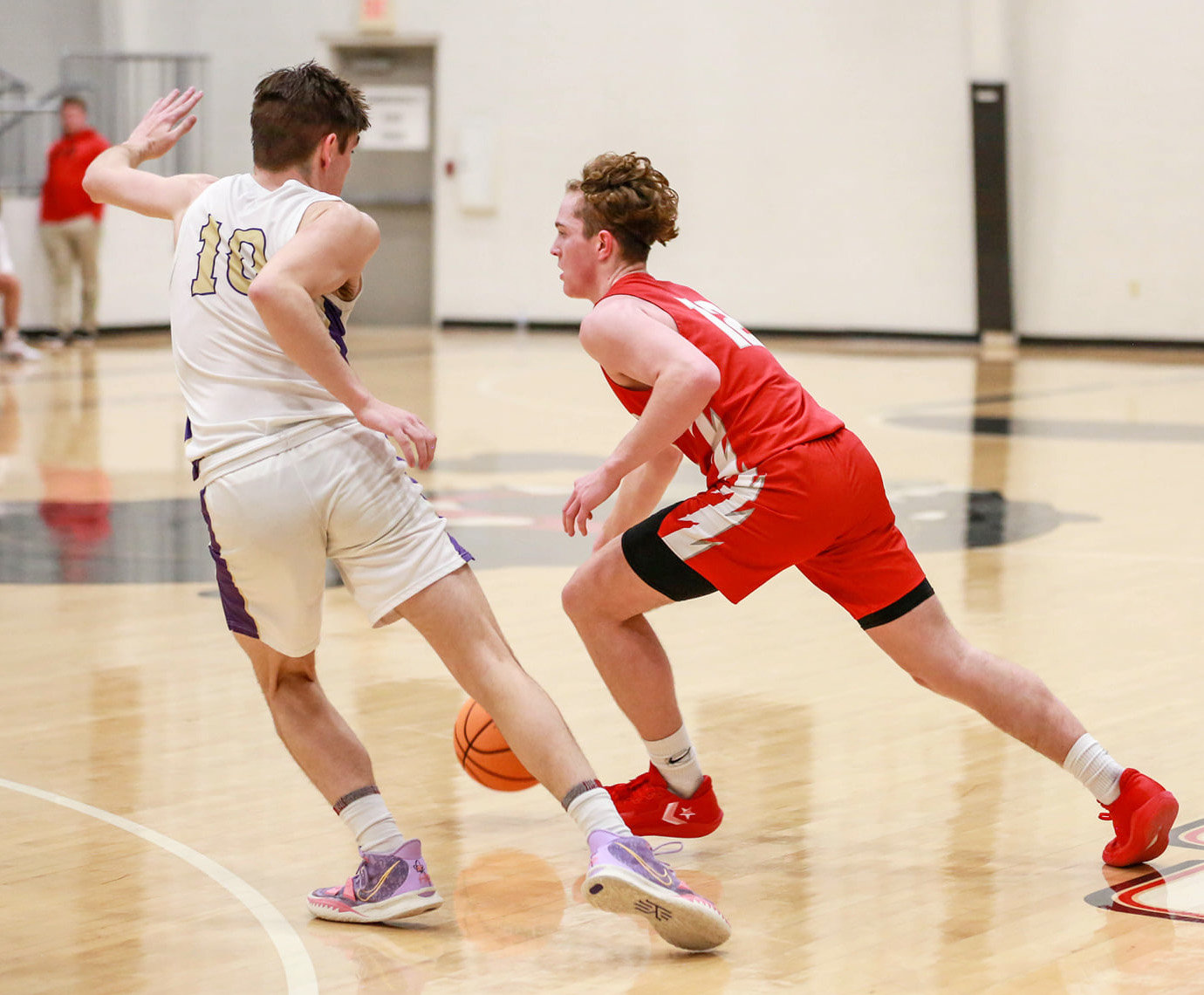 Purcell junior Lincoln Eubank drives with the ball during the Dragons’ 62-53 win over CCS in the Regional basketball tournament at Meeker. Eubank scored 11 points in the win.
Stephanie Knowles 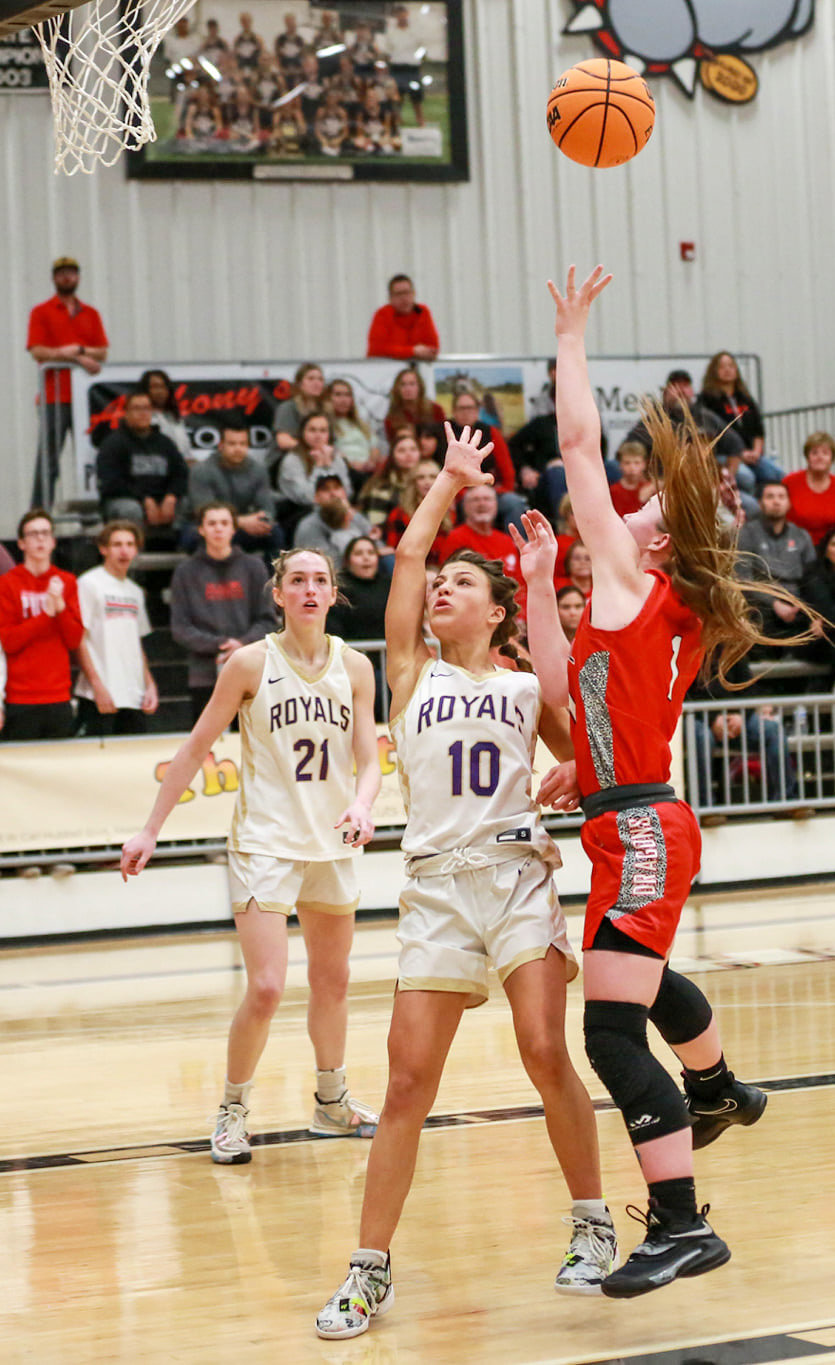 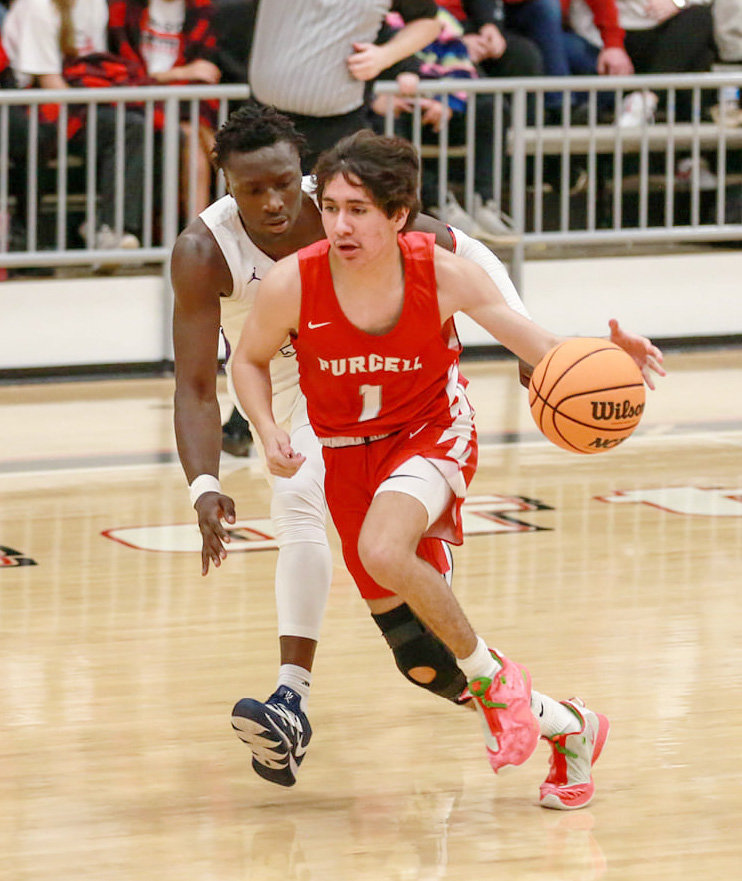 Purcell senior Adolfo Vasquez dribbles down the floor in a hurry during Purcell’s 62-53 win over CCS in the Regional tournament. Vasquez scored seven points in the win.
Stephanie Knowles
Previous Next
Posted Thursday, March 3, 2022 9:00 am
John D. Montgomery

Both Purcell’s boys and girls will advance to the Area Tournament in Enid later this week.

Whether they are in the winner’s bracket or the loser’s bracket depended on how they fared in the Regional Tournament finals Tuesday night.

The boys’ 62-53 victory over CCS in the opening round of the Class 3A Regional Tournament at Meeker was the program’s 1,600th victory.

The Dragons had three players in double figures in the CCS win with Malachi Evans leading all scorers with 25 points.

Lincoln Eubank finished with 11 and Nate Willis chipped in 10.

The Dragons were to play Sequoyah-Claremore Tuesday night at 8 p.m. for the Regional Championship. The game was delayed due to last week’s ice storm.

Purcell was 21-3 heading into the Regional title tilt.

Coach David Sikes’ Dragons avenged an early season blowout loss to CCS with a 68-65 overtime victory in the first round of the Regional Tournament at Meeker.

Junior KK Eck exploded for 20 points, her season high, to lead the Dragons. Fellow junior Lauren Holmes was in double digits, pouring in 17.

The two teams were deadlocked at 59 at the end of regulation play.

The Dragons responded in the extra frame out-scoring CCS 9-6. The  junior duo of Eck and Holmes each scored three points in the overtime period. Down the stretch, Purcell hit five out of 10 free throws that proved to be the difference.

The girls were scheduled to play a weather-delayed Regional Championship game at 6:30 Tuesday night against Luther.

Purcell was 16-8 heading into the finals Tuesday night.

Both the Regional Champ and Runner-up will advance to the Area Tournament. Both of the Regional finals were at Meeker.

The Register’s sports deadline is Tuesday afternoon. Check purcellregister.com for game information  and who they will play in Area for both the girls and the boys.