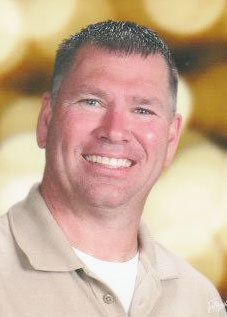 Mack was born January 12, 1967 in Norman, Okla., the oldest of three sons of Mack Stephens Buchanan and Donalda Sue (Hice) Buchanan. His early years were spent in Moore where he began school, before moving to Lexington. Mack graduated with the Bulldog Class of 1986.

Mack was a hard worker; a trait he learned as a young man. He started working for Glenn Mowdy with his buddy Tony on the Mowdy farm.  He couldn’t help but notice Glenn’s daughter, Janet, and he knew she was the one. Mack married Janet on August 11, 1986 in Lexington, Okla., and the rest as they say is history. They made their home in Wanette where together they raised three sons, Brandon, Christopher and Mack Wessely.

At the time, Mack was working at MBM and later for CISCO in the warehouse. His dream was always to be a law enforcement officer, and that dream came true when he began working as a Reserve Deputy for McClain County Sheriff’s Office. From there it was on to Lexington Police Department as a reserve. Mack then completed his CLEET certification and served patrol in Lexington.

He served in Konowa for a time, and at Norman Public Schools for a number of years.  It was here he earned the nickname “Shadow.” Mack joined Pottawotomie County Sheriff’s Department and served several years before his health forced him to retire. He was proud to wear the badge and genuinely cared about the communities he served.

Mack was a family first; he cherished his grandchildren and lived everyday for them. He enjoyed family get togethers, and never missed a chance for a weekend at the lake. He was a wonderful son, father, a proud grandfather, brother, uncle and friend. He will be dearly missed!

He was preceded in death by his wife, Janet Buchanan; father, Mack Stephens Buchanan and other family he considered dear.

2022-23 City of Purcell Budget Summary
For more information, contact the City of Purcell at 405-527-6561
Special meeting about new PMH
The Purcell City Council and Public Works Authority will hold a special joint meeting today (Thursday) at 5:30 p.m. in the city hall community room. On the agenda are several change orders for the …
Accidents snarl I-35 traffic
A series of traffic accidents including a five vehicle pile up at Johnson Road snarled northbound I-35 traffic for hours Monday. At least one child was transported to an area hospital. In the …
Holiday closings
The annual Purcell Memorial Day service will be held at 11 a.m. Monday at Hillside Cemetery. Army Col. John Mantooth will be the featured speaker, according to organizer Jay Tate. Flags on …
Congressional blessing
CongressmanTomCole, fourth from the left, was in Goldsby to see how the Economic Development Administration grant will be spent. The grant will be matched with $2.2 million in local funds and will …