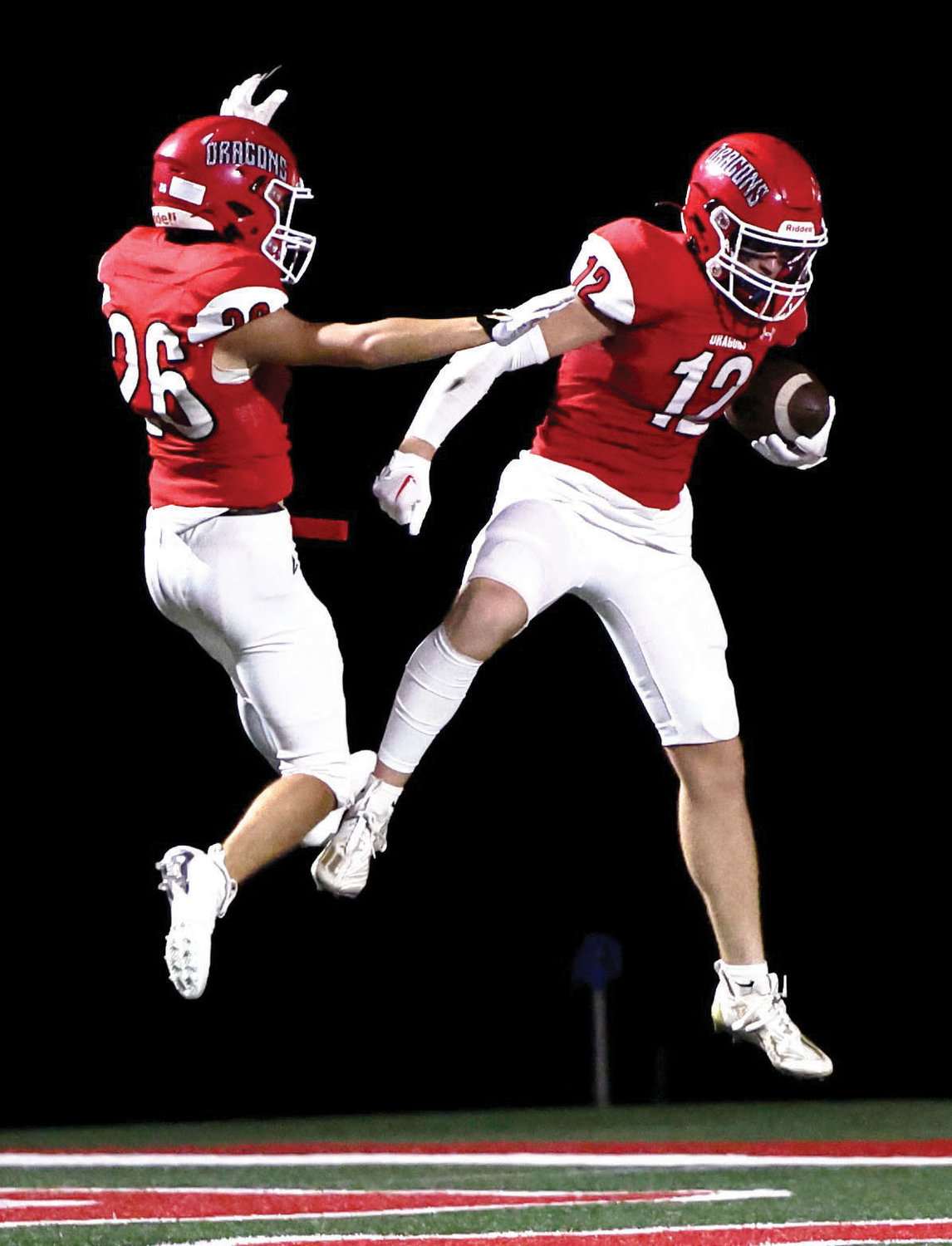 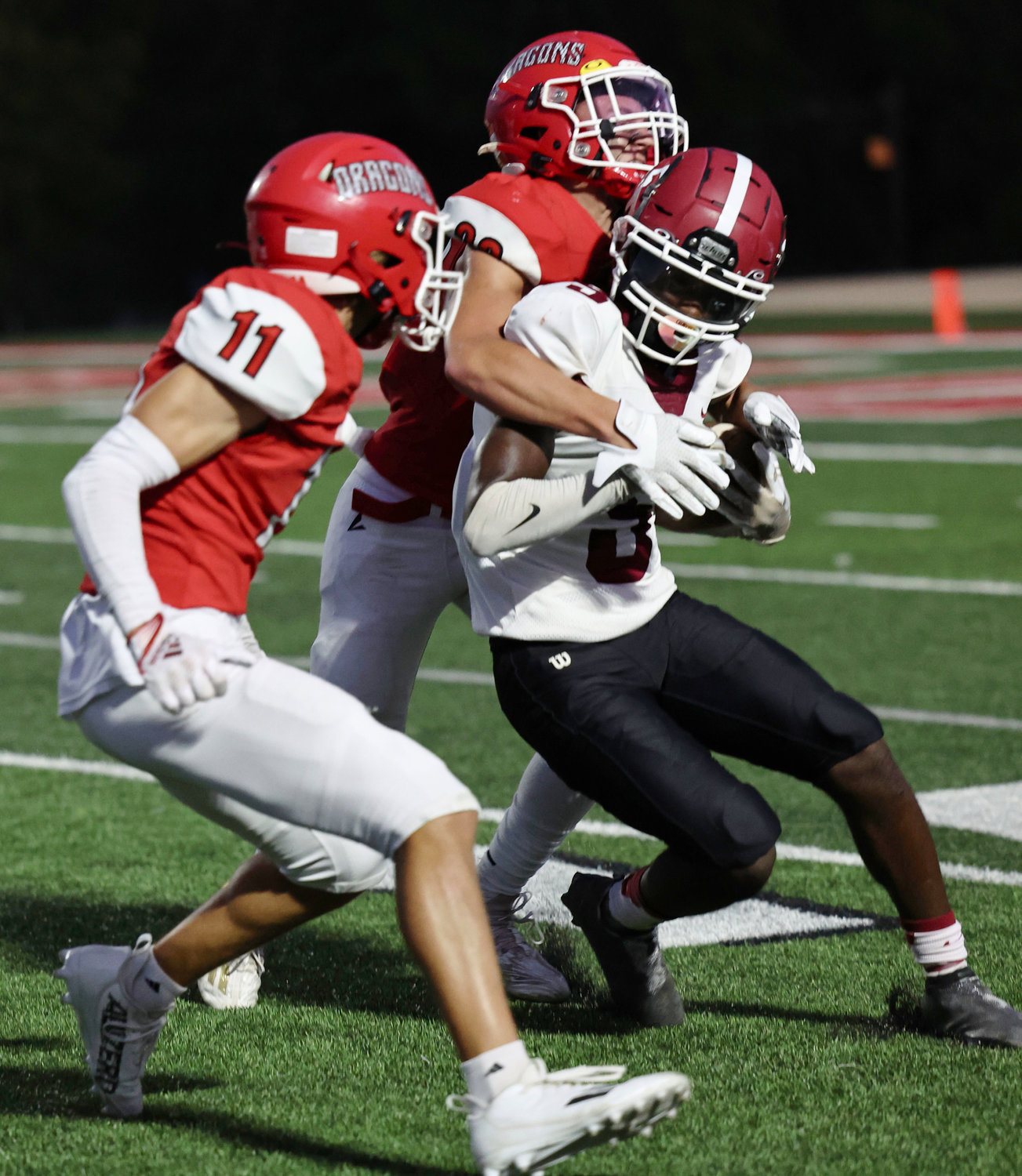 Outside of their first possession when Crooked Oak sprung its quarterback, Purcell head coach Tracy Scott said his defense played well in a 58-7 blow out at home last Friday night.

Paysen Purcell finished with nine stops. Right on his heels was Ryker Fink with eight stops and a quarterback hurry. Luke Edelman and Adam Edelman both registered six tackles.

“After their initial series we played well after that,” the coach said. “Fink played well at Willie, Luke at Mike and the outside linebackers Luke Edelman and Jose Ochoa played well.

“Payson Purcell and Kash Guthmueller both played well. Crooked Oak has athletes. Their quarterback is a really good player.”

Scott said he was surprised the Ruf-Nex didn’t run the play action boot pass as much as he expected.

“They ran a lot of basic fullback trap and I thought we did a good job shutting that down,” Scott said.

On offense the Dragons were very balanced with 207 yards rushing and 212 yards passing.

“We played pretty well on offense,” he confirmed. “We only had one turnover. Brody (Galyean) did a good job running the offense. We were able to run the ball and Lincoln (Eubank), Purcell and Ochoa all had good nights catching the ball.”

Eubank hauled in a 66-yard pass for a touchdown in the second period off the arm of Galyean. That pair hooked up again in the third quarter on a 22-yard scoring strike.

Ochoa snagged a two-yard pass for a touchdown and the Dragons got scoring runs of one yard by Fink, four yards by Boston Knowles and four yards from Purcell.

Guthmueller and Sloan Jackson closed out the scoring in the fourth quarter on runs of 14 and one yards respectively.

Galyean finished the night completing 14 of 18 passes for 2-7 yards and three touchdowns.

“And Jett (Tyler) and Sloan (Jackson) and some of the other guys who came in later, played well,” Scott said.

Up next is a tall order at Lindsay.

Kickoff for the key district contest is set for 7 p.m.

“Lindsay is a good football team,” Scott firmly stated. “They are the best Lindsay team I’ve seen since I’ve been here.

“They are most physical as they have been in the past. Even though they are run oriented they throw the ball well enough to keep you honest,” the coach continued.

“Their defense will come sick you. They attack you.”

The Leopards will line up in a 4-3 on defense.

“And they will get after you. Their linebackers make plays going downhill,” Scott said. “We will have to match their physicality. We’ve got to play clean, minimize penalties, have no turnovers and play well in the kicking game.”

A key component to the game will be Purcell’s ability to stop the Leopard’s running game.

“We need to stop their run game and try to get them in passing situations.”

“And their two outside receivers, Seth Padilla and Bentley Kessler, are 6’ tall, run well and catch the ball well when they do try to throw,” Scott said.

The Leopards are 3-1 just like Purcell with the blemish on both schedules being the Pauls Valley Panthers.

“We’ve got to come out and be full throttle from the start. We have not done that, yet,” the coach said. “We’ve got to be fast out of the gate.”

Purcell Head Coach Tracy Scott nominated Lincoln Eubank as the Offensive Player of the Week. Eubank had two touchdown receptions for a total of 87 yards.

The Defensive Player of the Week nominee is Kash Guthmueller, who made a team-high 11 tackles against Crooked Oak.

Rowan Ardery was nominated as the Offensive Lineman of the Week. He graded out at 96 percent against the Ruf-Nex.

There was no nominee for Defensive Lineman of the Week.

ISUF: It Starts Up Front