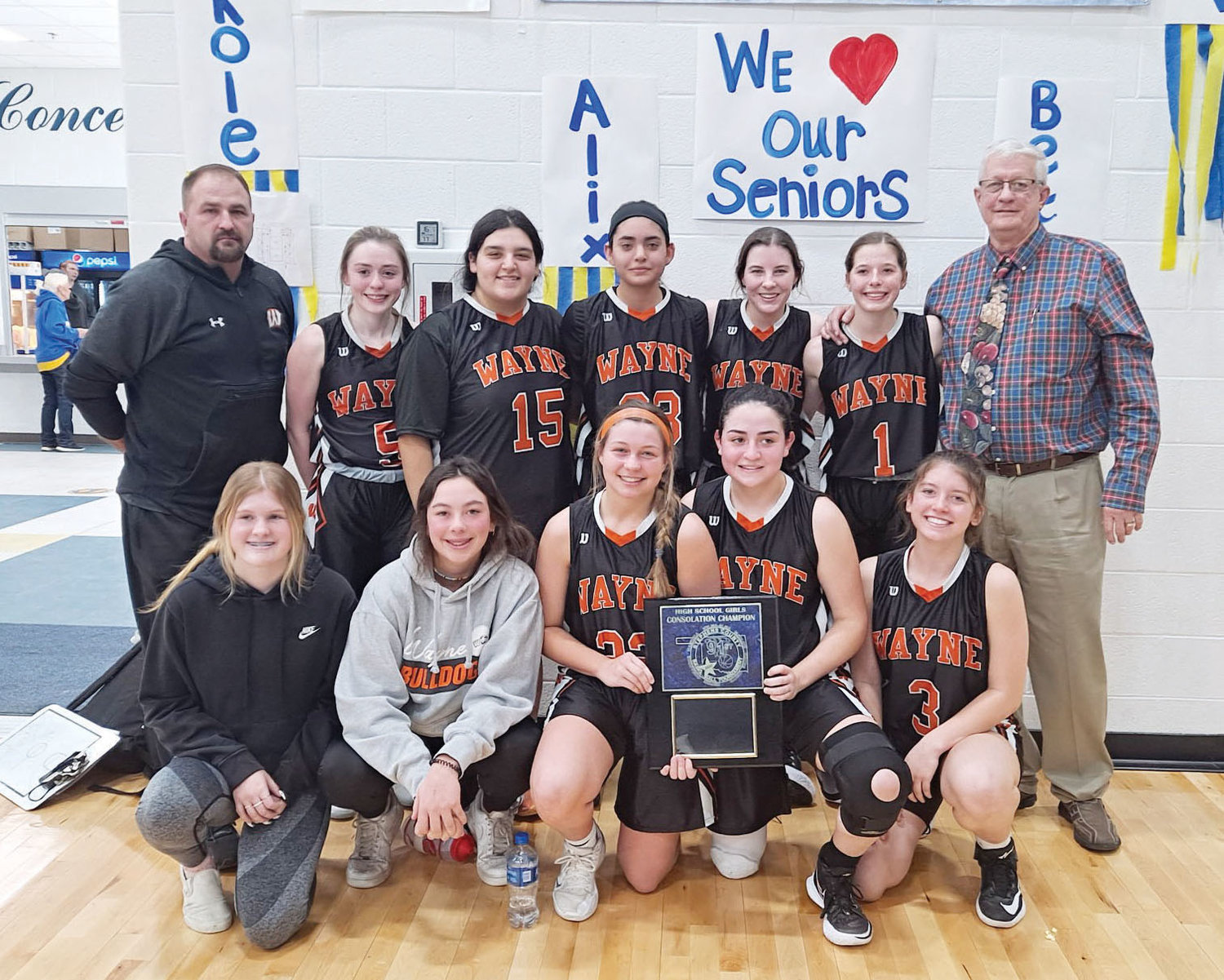 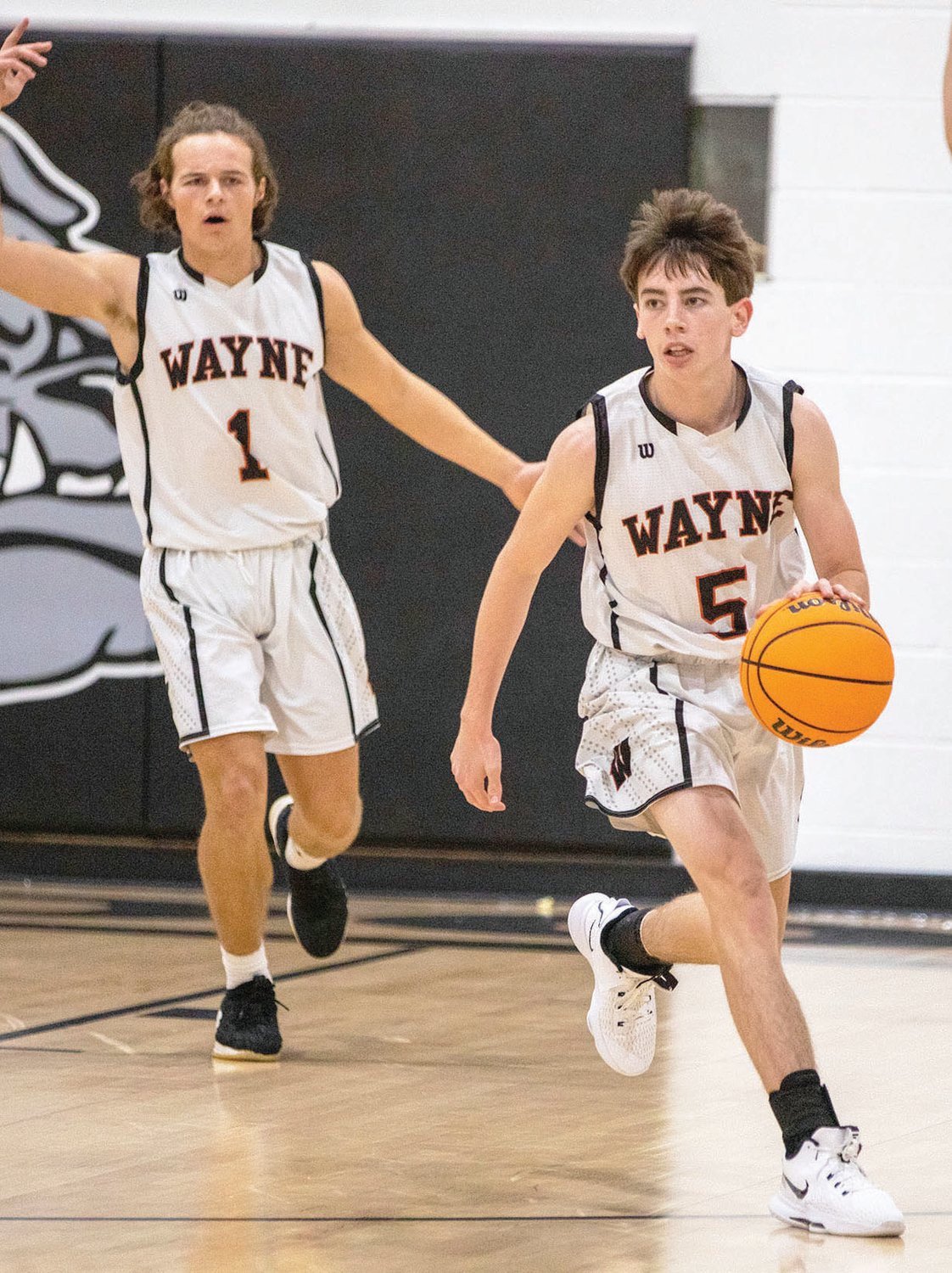 Despite dropping their first game of the Stephens County tournament to Marlow, the Wayne Lady Bulldogs got wins over Comanche JV and Empire to win the Consolation.

Last Friday, Wayne got the 50-39 win over Comanche JV.

According to head coach Bill Burnett, the Wayne defense kept the Lady Bulldogs in the game.

“We played good, solid defense until our offense got going.”

That win sent Wayne to the consolation game where they beat Empire, 35-26.

“The girls played through a lot of adversity.

“We had good defense and a solid performance at the free throw line, going 18-21,” Burnett said.

Kaylee Madden and Martinez were in double figures for the Lady Bulldogs with 13 and 10.

“Every girl contributed big in knowing their assignments and executing on both ends of the floor.”

The Lady Bulldogs were in Dibble Tuesday night. They host Konawa Friday night along with crowning Homecoming King and Queen.

Head coach Jackson Embry and his Bulldogs started the Stephens County tournament with a 56-41 win over Empire.

“Empire is a good match-up for us. We played really well,” Embry said.

Wayne jumped out in front from the start and didn’t look back.

“Marlow is as advertised. They started out hitting 13 of 13 and we couldn’t make a shot,” Embry said.

Scoring for Wayne was led by Mullins with 13 and Madden with 10. Jr. Perez added seven.

Accoring to Embry the Marlow bench was much deeper than Wayne’s.

“They had more guys on the bench that could get the job done. It was a tough loss, but it’s good to see a team that is where we hope to be in the future,” Embry said.

To end their tournament play, Wayne lost a frustrating game with the Comets.

“That might have been the worst game we’ve played all season. Velma’s post game was dominant and we struggled to stop anything down low.”

Embry was pleased with Perez’s play during the tournament. He is currently third in the state in assists.

“Jr. is usually a facilitator, but he stepped up his scoring for us.

“I hope he continues to play like that and demands the ball more.”

Madden led the team with 13 points in the loss.

Embry and his Bulldogs were in Dibble on Tuesday and then scheduled to host Konawa on Friday night.

More local news
OEC contractor critical following bizarre traffic accident
Purcell Police are continuing their investigation into a Saturday afternoon traffic accident at Wyatt Road and Green Avenue when an OEC employee was severely injured. The OEC employee, Nathaniel …
Goldsby election Friday
Goldsby residents will be heading to the voting booth today (Thursday) and Friday. That’s when residents will decide whether or not to form a charter for its government. The town’s …
Byars woman dies in house fire
The McClain County Sheriff’s Department and the Oklahoma State Fire Marshal are investigating a fatality house fire in Byars Sunday afternoon. Deputy sheriff Timothy Cook responded to the …
Uhlenhake top Purcell teacher
Purcell kindergarten teacher Amanda Uhlenhake has been named the District-wide Teacher of the Year at Purcell. Other building ToY include high school counselor Melissa Feroli, junior high science …
Real-life skills class a hit at PHS
Automobiles that can go from zero to 60 in a quarter of a mile are highly touted and sought after. Purcell High School’s Zoe Swift and her teacher buddy Mindy Wells have done just that, only …