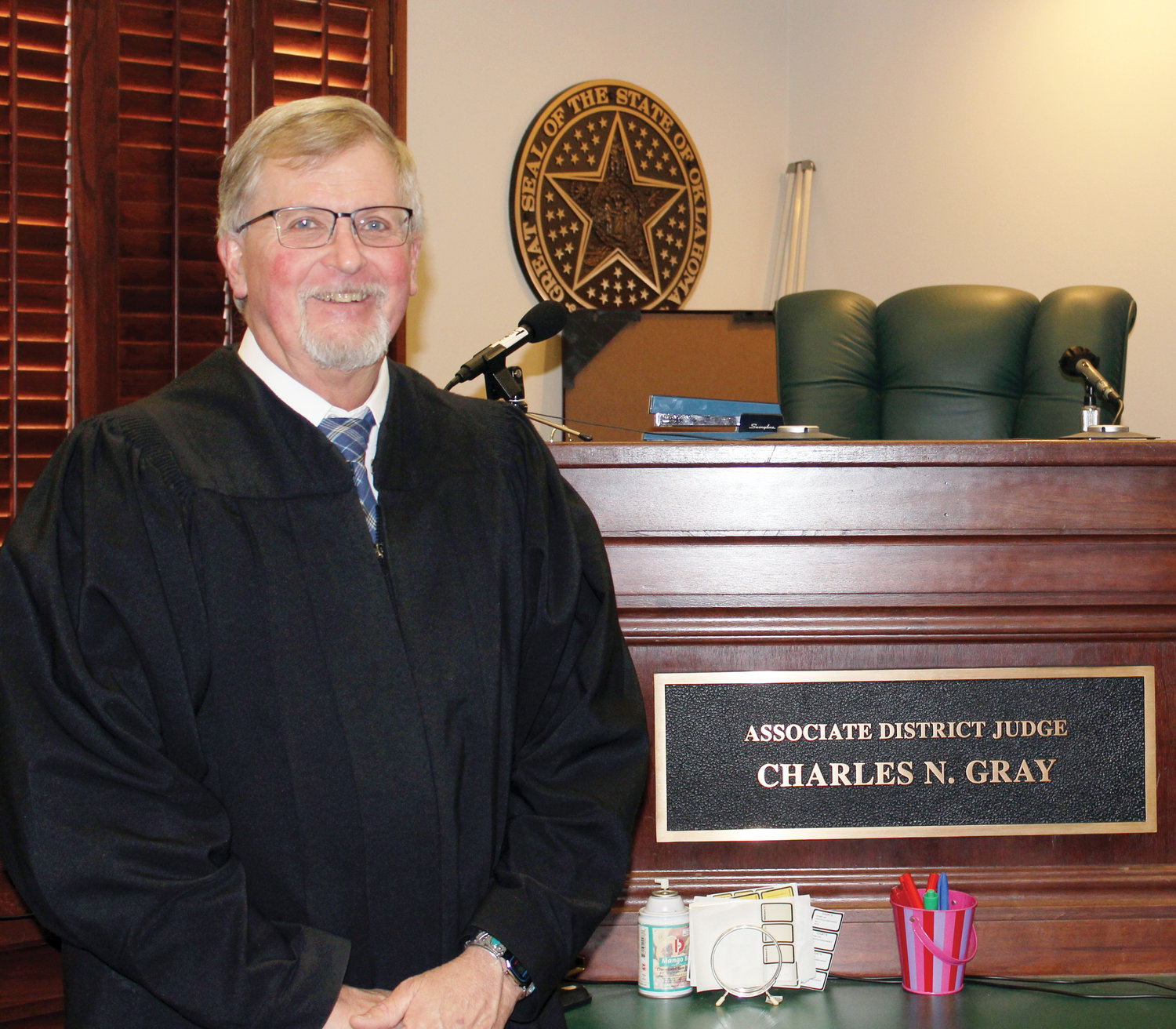 Charles Gray has held the position of associate district judge in McClain County since 2006. He first won the seat by what was then the closest race in McClain County. On a recount his 24-vote lead increased to 27 votes.
Jeanne Grimes
Posted Thursday, January 13, 2022 9:00 am
Jeannie Grimes

An undergraduate degree in psychology may give one a lifetime of insight into human behavior.

But it’s not exactly marketable when searching for a job, much less a career.

Charles N. Gray was born and raised in Purcell. In  1954, he was delivered in the old hospital which was across Washington Street from the McClain County Courthouse where he works now as an associate district judge.

After graduating from Purcell High School in 1972, he enrolled in the University of Oklahoma where he chose psychology as his major. He received his bachelor’s degree in 1977 and immediately entered the work force.

He would try numerous occupations over the next two years.

He was a bricklayer for a time and then found work tarring roofs. He worked in the produce department of an Oklahoma City grocery store and took a job surveying county bridges, assessing their overall condition and ranking those deemed deficient for eventual repairs.

His job searches also led him to a position in the Department of Human Services Food Stamp Division.

“It was while I was at DHS that I had an interest in pursuing the legal field,” he said.

That interest may have also come from home.

Charles’ stepfather who raised him was a local attorney, Purman Wilson.

Still it was something of a “wild hair” that led Charles to pay $100 to take the law school admission test.

“Between my score and GPA, I was admitted to law school at Oklahoma City University,” he said.

He completed law school in three years, graduating in 1982. In October of that year he was notified that he’d passed the bar exam.

In December 1982, he joined the staff of then-District Attorney Tully McCoy as an assistant DA.

As a brand new attorney and prosecutor, his responsibilities were largely confined to prosecuting traffic and some misdemeanor cases.

He was, however, assigned one felony case in Cleveland County which he won, sending an attempted rapist to prison.

In June 1984, Charles entered private practice, defending clients instead of prosecuting them.

It is a difficult switch – one he’s made twice now.

“After a while you get to see both sides of a case,” he said.

“There are always two sides to a story.”

Those two sides aren’t always immediately apparent to a prosecutor who is presented each case by the police who also include evidence pointing to a perpetrator.

“Law enforcement today is night and day compared to what it was back then (1980s),” he said.

So is the system of court-appointed defense attorneys.

Charles recalled the time he was called out by a judge in Garvin County and ordered to defend a murder case involving a shaken baby.

“It was a heinous case,” he said, adding the father was charged with killing the infant.

As he delved more into the case, however, he became convinced the man was innocent. There was evidence, he added, that pointed to the mother.

The first case ended with a hung jury. In the second trial, Charles won an acquittal for his client.

He said working the case was really hard and it nearly bankrupted him because he “had to spend all my time working on it.”

In 2006, he ran for judge and was elected by what was at the time the closest margin in McClain County history – 24 votes.

After a recount, he actually won by 27 votes.

Charles said he’s found his place as an associate district judge. He has no ambitions beyond that bench where, to a point, he is able to help people “get through things.”

“I don’t live everybody else’s life. They do. I try to help people make their own decision,” he said.

His parents – Woodrow Gray and Lamarylis McFarland – are both deceased. He in 1990 and she in 2005

Charles is divorced and his ex-wife, Kristel, is McClain County’s court clerk.

He has two sons. Aaron, the older, owns an automobile repair business in Blanchard. Landon works at the Walmart Distribution Center at Pauls Valley.

Both are, in their father’s mind, “too young” to have any interest in the law.

He also has a stepdaughter, Scarlett Mackenzie Albert, who is in nursing school. She and her husband, Justin, live at Washington. They have a daughter, Avery Marie Albert,

To Charles’ thinking, Purcell is and always has been home.

He has no interest in pursuing an “ivory tower” position in Oklahoma City and no aspirations for any other political office.

So if not for the law, what would he be doing today?

He thinks he might have liked working in mechanics.

Of course, mechanics today isn’t what it once was. Neither is the law.

“Law changes really fast,” he said. “My stepfather told me ‘Always go back and  read the green books (state statutes) because the law might have changed in the past six months,’” he recalled.

The country may have been founded on the principal of innocent until proven guilty, but nowadays, people have to prove themselves innocent.

In fact, Charles cannot recall any recent case in which a defendant was found not guilty without taking the stand.

Still, Charles said people should be proud of their court system.

He for one is proud of the brilliant people who have passed through the doors and with whom he has associated.

He’s also proud of his record and his decisions that have been affirmed by the appeals court.

He’s learned, too, from his associations.

L.D. Oliver was his mentor for many years.

Charles recalled one time they were trying a case together. The task of cross-examining a witness fell to Charles. When he was finished and returned to his seat, Oliver leaned over and whispered, “Sit down, shut up and  quit asking so many (expletive) questions.”